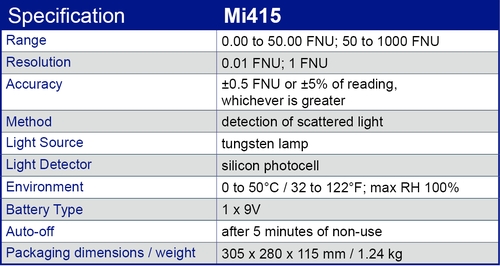 Turbidity refers to the concentration of undissolved, suspended particles present in a liquid.

Turbidity is a measure of the clarity of a sample.
For potable water applications turbidity is a good indicator of water quality.
Turbidity Measurement is achieved by analyzing the amount of light refracted from suspended particles such as clay, silt and organic material.
By measuring turbidity, by photometric or tube methods, it is possible to estimate suspended solids content.

Mi415 is supplied in a hard carrying case, complete with reagents.

The cloudy appearance of water (called Turbidity) is caused by suspended material.
The unit of measure adopted by the ISO Standard is the FNU (Formazine Nephelometric
Unit) and by EPA is NTU (Nephelometric Turbidity Unit).
The other two methods used to test for turbidity and their measurement units are the JTU (Jackson Turbidity Unit) and the Silica unit (mg/L SiO2).
See the conversion table of these methods and their units for your reference.